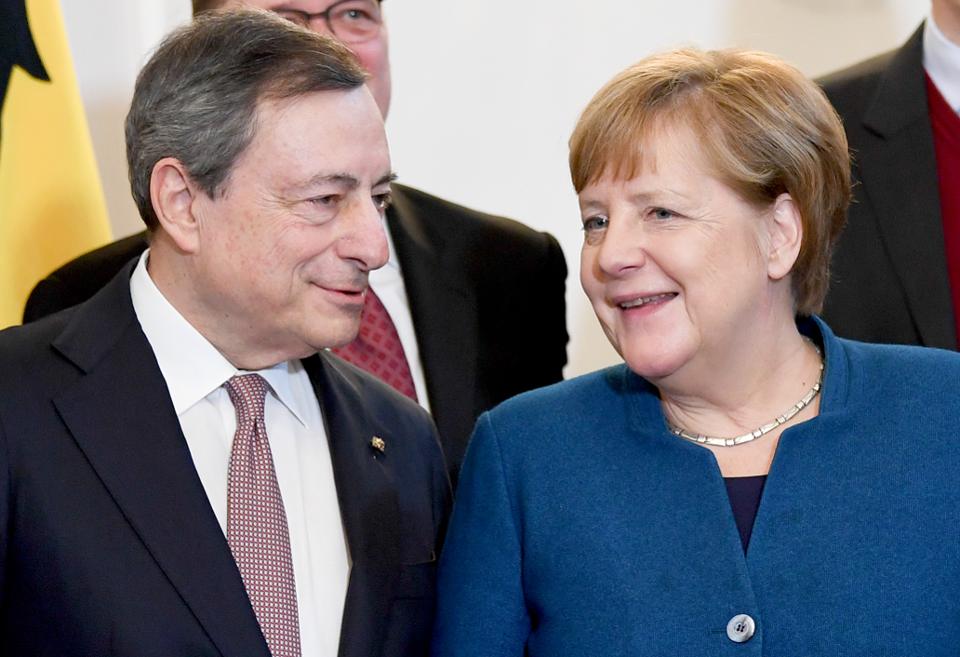 Earlier this month, the Federal Reserve threw a lifeline to the Ford Motor Company (and other credit-challenged companies) by committing to buy Ford’s bonds, recently downgraded to “junk” status. The Fed’s aim, broadly, is to stabilize the segment of the market that serves companies that are at highest risk as a result of the COVID-19 crisis. It is a smart move. It is a controversial move. There are implications. But the maneuver seems to have worked for now. The financial market has re-valued Ford’s existing bonds, signaling easier access to capital, at a lower cost. Ford is not out of the woods, but its chances have improved.

“Whatever-It-Takes” – now there’s a marvelously ordinary phrase, but also, as everyone knows, a magical one, once, and maybe now again magical, as we hear it suddenly everywhere, a reassurance, a solemn pledge, a “mantra”, in the mouths of finance ministers, central bankers, and heads of state, across Europe and beyond. Yes, even heads of state – in the past two months the phrase has been invoked by the elected leaders of the British, Spanish, Italian governments – all quoting it in the original English, by the way, so as to be perfectly clear. The French and German leaders offered their versions in their local dialects, and were also perfectly clear. The American president has used it. The G7 leaders came together and declared their support for WIT. And so the G20: “We commit to do whatever it takes.” These are desperate times. This simple phrase changed the course of world history before. Perhaps it will work again. Everyone it seems is trying to conjure its once-upon-a-time power, to push back against the crisis of the moment

The history of the phrase is almost well-known enough to defy any need for further elaboration. Draghi said it, in 2012, and yes, it was passing comment – some have alleged even an improvised comment – tossed off to a roomful of finance men at a lunch in London. But it worked. Saved the day. His name is linked to it forever. It will certainly be in the first paragraph of his obituaries. “Whatever It Takes” will be on Mario Draghi’s tombstone.

The background is this. In 2012, the former President of the European Central Bank was facing a supremely difficult moment in the history of European Project. The Eurozone Crisis was forbiddingly complex, a mess of sovereign default possibilities involving the debt of half a dozen European countries, knock-on threats to major European banks that happened to be holding that debt, and at the pinnacle of the house of cards, the heretofore-untested Euro, a currency without a country, or with too many countries, and no clear sponsor. Then, into this chaos, the President of the European Central Bank (Draghi) stepped forward and arrogated powers that had truly never been actually delegated to him or to the institution, but in the hour of crisis his critics were unwilling/unable to block what seemed to be the only way out of the matter – and the ECB came suddenly and forcefully into its own as a real Central Bank for the EU, with powers perhaps not quite those of the Federal Reserve or the Bank of England, but close enough. Yes, he usurped, but for the good. Whatever-It-Takes was his declaration of the coup.

Here’s what he said:

The ECB is ready to do whatever it takes to preserve the euro. And believe me, it will be enough.

You can watch the video and what will probably strike you is how little drama these words convey in the live moment. It’s just a bureaucrat talking the way bureaucrats talk, or so it may seem. But — in the nature of these things, the traders who move the markets seized on those three words, and walked the Euro back from the brink. The whole situation turned, and the Eurozone’s recovery began, right then and there.

What does WIT actually signify? One pundit has put it this way, elegantly:

The words have come to stand for the technocratic determination to meet a crisis with all necessary force.

But this is too vague. Specifically, Whatever-It-Takes in its original moment signified that the ECB was ready to start printing money, big-time, and to use that flood of money to buy the shaky bonds in question, prop up their prices and so “save Europe.” In our era, the process is known by its euphemism – quantitative easing (QE).

QE is a conceptually simple: the central bank goes into the market, like any other trader, and buys bonds, in huge quantities. To pay for these bonds, the central bank prints money, electronically. So if the ECB buys €100Bn of bonds, it creates €100Bn of new money, which flows into the market, into the hands of the sellers of those bonds, giving them new scope to spend, lend, and invest. Simple enough. Monetary stimulus.

The technique was invented by the Japanese in the early years of this century, a desperate ploy, as it was first seen by most Western observers – until the 2008 financial crisis, when QE suddenly became Policy, in the US and then elsewhere, and the Westerners quickly outdid the Japanese.

A QE policy raises tricky questions, though. First – What kind of bonds should the central bank buy? In the beginning, when the bankers were still innocent, they bought only risk-free government bonds, but today (2020) they have become far more liberal, buying mortgage bonds, corporate bonds, municipal bonds, junk bonds, ETFs, equities…

Second – who do they buy them from? Buying securities in the open market, from any and every willing counterparty, can be seen as relatively impartial. It has the principal effect of providing liquidity to the market. Decisions as to how the newly created money is re-deployed remain with the private sector. But the central banks later began to buy the bonds directly from the issuers of those bonds, starting with their own governments, and by now extending to corporate issuers – which puts the banks in the position of funding those entities, governments and companies, above and beyond and quite aside from improving market liquidity. Which means the banks are increasingly in a position to decide who to fund, sidestepping the capital allocation functions of the market. A can of worms for sure.

This was what Draghi meant by Whatever-It-Takes, as it turned out: a massive and coordinated program of QE, to compensate for the fact that there is no federal fiscal policy in the EU. Many observers have lately taken to citing the ECB as the savior of the EU, for this reason. It supplies a form of fiscal policy through its targeted bond buying and related programs.

Draghi didn’t waltz into this. He had to fight the headwinds of a conservative resistance centered in Germany and the Bundesbank. It was never easy or settled. As recently as last Fall, a cabal of former central bankers from central Europe (mainly Germany and Austria) felt compelled to issue a joint memorandum excoriating Draghi’s policies and aiming perhaps to bully his successor (Christine Lagarde) into a reversal of them. She wavered. But with the exigency of the COVID crisis, she fell in line behind Whatever-It-Takes. And all was well. Draghi was wise, and bold, fighting the good fight for Progress and Europe. Lagarde followed the script. The ECB was the best (if not the only) hope for pan-EU governance. How could it be otherwise?

Yesterday, the German Constitutional Court (the Bundesverfassungsgericht, if you like) – Germany’s closest equivalent to the U.S. Supreme Court – essentially struck down the ECB’s entire quantitative easing program.

The ruling is harsh and unequivocal, even shocking.

First of all, the Court declared QE “illegal” in principle, illegal for the very reason that WIT has worked – because it strays into “economic and fiscal policy.”

Second, it asserted the priority of German Law over EU Law – the German court bluntly overruled a prior decision in favor of the QE program by the European Court of Justice in Luxembourg. This left observers gasping (as reported in the Financial Times):

“This is the first case where a German court says the judgement of the European court has no jurisdiction.”

“The Karlsruhe court raised serious questions about the even application of EU law across the bloc.”

And, to leave no doubt that this is no mere judicial opinion, but a legal ruling meant to be enforced, the court instructs the German Parliament to “take active steps against [QE] in its current form.” It calls on the Bundesbank to prepare to halt participation in the QE program. Without Germany, the program would be crippled.

“In theory, only the Bundesbank is bound by these requirements, not the ECB. In practice, however, it is hard to believe that the bond purchases will take place in the future without the participation of the Bundesbank.”

The market reacted as one would expect. All the southern European bond prices fell. The German/Italian bond spread widened. The Euro fell against the dollar.

The European coronavirus response is at risk. Although the court’s ruling fig-leafed the COVID matter by temporarily exempting the current aid programs, the message is clear.

“This limits the scope for buying Italian government bonds in particular.”

“This is another barrier to solidarity during the Covid crisis.”

If Draghi’s QE policy was a coup, this is the countercoup, or as one (German) expert put it – “a declaration of war.” The ECB’s Governing Council announced (icily) that it “takes note” of the Court’s ruling, but that it “remains fully committed to doing everything necessary.” Whatever-It-Takes is still in place. But the German Court’s clock is ticking.

We are approaching the climax of this constitutional drama. In American parlance, this is now a House Divided. And on fire (COVID). The matter must soon break one way or another. There will be common action, solidarity, and, yes, mutualization, sharing of financial obligations – or the end of the ECB’s and the EU’s only effective collective policy response to the worst economic crisis since World War II.