We are officially over 10 years past the Great Recession of December 2007-June 2009. For many of us, the memory of that period remains vivid, and a decade later we are still feeling the aftershocks in some segments of the financial markets. Case in point, the ongoing saga of the Government-Sponsored Enterprises Fannie Mae and Freddie Mac, making headlines as the Trump administration prepares to release them from their decade-long, government conservatorships. Not long after the last recession ended, investors started looking for signs of the next one. But with no obvious speculative bubble – as was the case with the dot-com and housing bubbles – and no rampant inflation – as in the 1980s – investors and economists have remained somewhat divided on what would kill the relentless bull market that has been in control since mid-2009.

In recent months, however, the chorus of concern has grown, largely as a result of the inverted Yield Curve and the US-China trade war. Economists and financial prognosticators have been lining up to offer their predictions, typically expressed as some percentage of likelihood that the US falls into recession in the next year or so. We can see such forecasts aggregated by Bloomberg via their United States Recession Probability Forecast, which shows the median probability in the 35% range as of this writing, though the range of forecasts varies from a low of 3% to a high of 70% depending on the source. Famed Doubleline Capital CEO Jeffrey Gundlach put the odds even higher, at over 75%, in recent remarks at a London event.

The Bloomberg Recession Probability Forecast Index does not precede the Great Recession, but we can utilize Google search to see that around December of 2006, right after the yield curve had inverted, forecasts from Fannie Mae cited a similar 35% recession probability for 2007. At that point, the S&P was up a solid 15.8% in 2006 and would gain another 11.4% through the October 2007 peak, before suffering the historic -55% financial crisis decline.

Post-Great Recession, the only time the consensus forecast probability hit 35% was in September 2011, and we avoided a recession. The yield curve did not invert that time, but economic data showed significant slowdown and negative manufacturing growth. Ultimately, manufacturing snapped out of its slump and the market resumed its steady ascent. From the low point on October 3, 2011 to September 13, 2019, the S&P has advanced over 222%.

These two instances of elevated recession concerns, 2006 and 2011, demonstrate the complexity of recession forecasting. In both instances the heightened risk could be attributed to a multitude of factors aside from interest rates and economic data, such as housing speculation, overuse of speculative derivatives by Wall St. firms, the European debt crisis, and more. In both cases, the stock market continued to advance in the subsequent months despite the elevated risk level.

In today’s case, recession warnings are being triggered by interest rates and economic data. Below, we will explore what the underlying data is telling us about the state of the economy, and the likelihood of a US recession in the coming year. 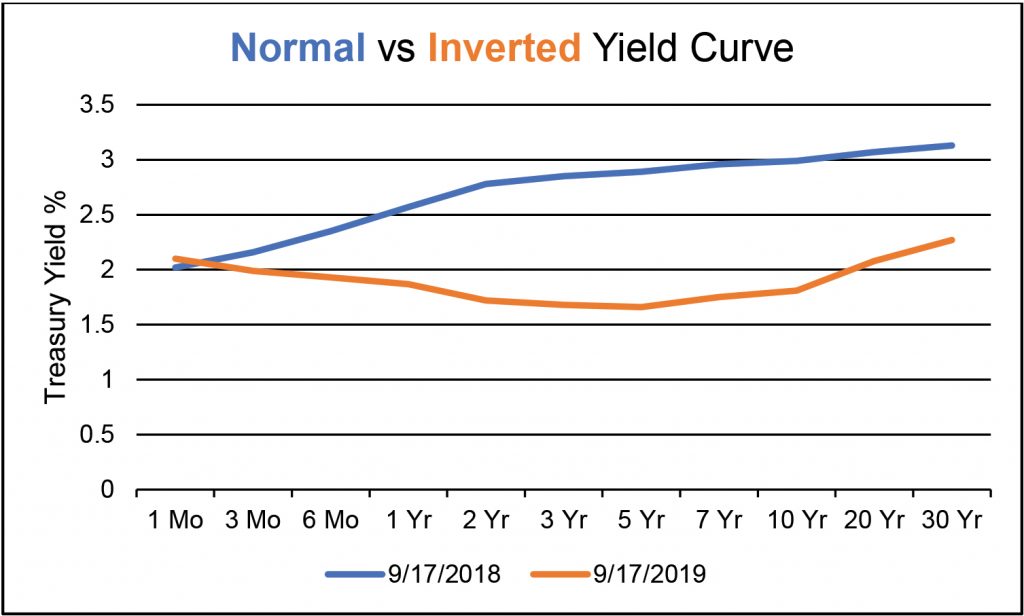 Data Source: US Department of the Treasury, Chart by Hanlon Research

For well over a year now, economists and investors have fretted over the ominous yield curve inversion. For the uninitiated, an inverted yield curve simply means that interest rates on short-term bonds are higher than interest rates on long-term bonds. In a growing economy, a higher rate of return is required as compensation for investors to lock up their money for a greater length of time. However, when the yield curve inverts, it can be implied that investors consider the near-term investing prospects to be unattractive and are willing to overpay for the perceived safety of long-term bonds.

The implication of an inverted yield curve is that the flight to safety may be a precursor to an economic recession. The below charts illustrate Google search trends for “Yield Curve Inversion” and “Recession”, respectively. Numbers represent search interest relative to the highest point on the chart for the given region and time. A value of 100 is the peak popularity for the term. A value of 50 means that the term is half as popular. Public awareness of the yield curve inversion has reached a peak, and the prospect of recession is also clearly at the forefront of the public’s collective consciousness. 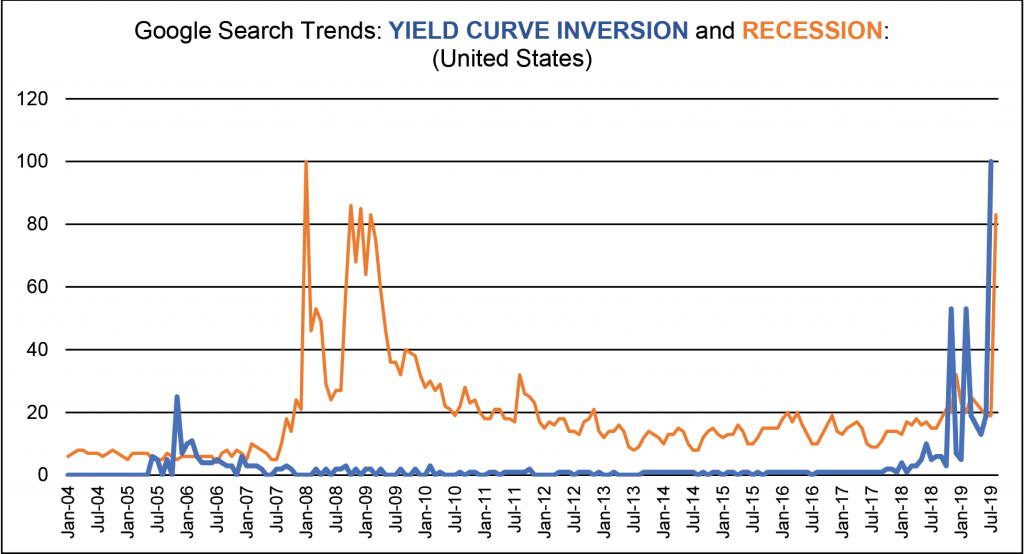 The inverted yield curve is certainly worth attention but should also be viewed in the context of global interest rates. We are amid an unprecedented global easing cycle that may have caused the Yield Curve to lose its predictive reliability. Global central banks, particularly the European Central Bank and the Bank of Japan, have pushed bond yields to all-time lows. 10-Year yields in Germany, France, the Netherlands, Switzerland, and Japan are negative. On a relative basis, the US looks very attractive and foreign investment triggered by this divergence may be artificially depressing long-term US bond yields. Fully aware of the folly in saying “it’s different this time”, it just may be the case that the influence of central banks has distorted the reliability of the Yield Curve in this instance.

If the Yield Curve data is suspect due to central bank intervention, what does the other economic data tell us? Consumer spending, which makes up over two-thirds of GDP, has been steadily increasing, with virtually no impact on US retail spending habits from the US-China trade war, thus far. A research survey from Deloitte suggests that this trend could continue through year-end with a forecasted $1.1 trillion in holiday sales. Consumer confidence is high thanks in part to the strong labor market. The unemployment rate has held steady at 3.7% with a record 157,878,000 people employed as of August. Job growth is showing signs of slowdown however, as just 130,000 jobs were added compared to 160,000 expected.

While the US consumer is spending freely, data suggests businesses are taking a more cautious approach. Regional surveys show growing pessimism from business owners, with the General Business Conditions Index from the NY Fed’s Empire State Survey declining in the most recent report. The same report showed that the Capital Expenditures Index had plunged to its lowest level in three years, as businesses turned reluctant to engage in new investment amid trade war uncertainty. Manufacturing data slipped in July but bounced back strongly in August, suggesting that the impact of the trade war on US industrial production may have been somewhat overstated, thus far.

The other major driver of the US economy, the housing market, is sending mixed signals. Low mortgage rates are spurring purchases and refinancing activity, but the uncertainty surrounding the trade war has limited the supply of new homes being built. Homebuilders have started to pick up the pace in recent months however, as housing starts hit a 12-year high in August. Despite the low interest rates, many young families continue to delay home purchases, as the burden of student loan debt prohibits them from buying, and surveys show that even the prospect of a recession on the horizon may cause some buyers to delay buying a home.

While headlines of increasing recession odds can be scary, there is plenty of reason for optimism. First, the odds still strongly suggest no recession in the coming year. The major driver of the higher-than-usual recession risk is self-inflicted, stemming from the US-imposed tariffs on China. Any resolution will likely result in a scenario where recession is averted, even a toothless deal that maintains the status quo. The optimal, albeit unlikely, result would be a real reform to the rampant theft of intellectual property by Chinese companies, which costs the US an estimated $225-600 billion per year, according to the Commission on the Theft of American Intellectual Property. The worst outcome would be a continuation and ultimately escalation of the existing tariffs for a prolonged, or permanent period.

Finally, there is an argument that we will not see a recession for some time because we are amid an explosion of new technology, the result of which is increasing levels of productivity and a continual reduction in inflation. We have seen unprecedented advances in recent years, in fields that only existed conceptually a decade ago. It is not a stretch to draw parallels to prior periods in human history – the copper, bronze, and iron ages, or the industrial revolution – in which a leap in technology ushered in a wave of innovation. We just may be at the very beginning of a data revolution, where the massive potential of machine learning and artificial intelligence is unleashed in a wave of productivity, which will ultimately keep inflation in check.

Looking at the overall picture, it seems very possible that we’ll avoid a recession in the coming year. The economy doesn’t seem to show any of the traditional signs of overheating, and the Fed seems to have learned from its prior missteps. Inevitably though, we will see a recession occur; but we can take solace in the fact that some of the best investing opportunities typically occur in the late stages of recessions.