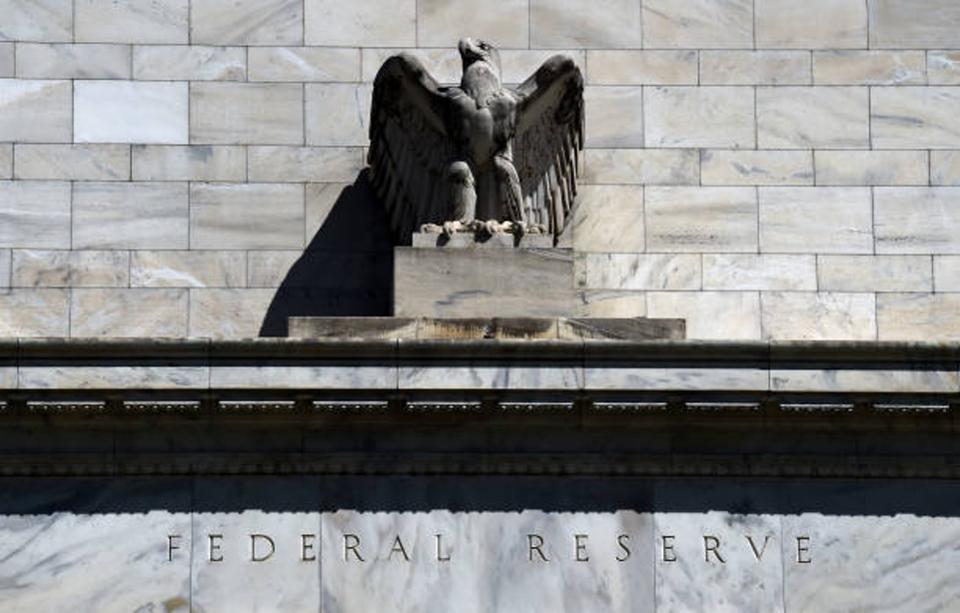 The power of the Fed AFP VIA GETTY IMAGES

This is part of a series of posts dealing with the impact and implications of the COVID-19 pandemic for the Financial world.

Earlier this month, the Federal Reserve threw a lifeline to the Ford Motor Company (and other credit-challenged companies) by committing to buy Ford’s bonds, recently downgraded to “junk” status. The Fed’s aim, broadly, is to stabilize the segment of the market that serves companies that are at highest risk as a result of the COVID-19 crisis. It is a smart move. It is a controversial move. There are implications. But the maneuver seems to have worked for now. The financial market has re-valued Ford’s existing bonds, signaling easier access to capital, at a lower cost. Ford is not out of the woods, but its chances have improved.

Now, in contrast, consider how the market processed a very similar set of surface facts, but found a deeper layer of weakness, which led to a very different outcome.

Among the sovereign nations of Europe, Italy is the analog of Ford. Economically important to the big picture, but over-leveraged (the highest debt-to-GDP ratio in the EU, except for Greece), its engines idling (three recessions in ten years), its stock falling (the Milan exchange has suffered the worst decline in Europe), its credit teetering on the edge of a “junk” rating. And now slammed by the COVID pandemic. The country needs urgent financial help to relieve the suffering and restart the economy. But so far, the Germans and the Dutch have blocked efforts to create a funding mechanism that could mobilize the resources of the EU as a whole. Proposals have been aired to allow Italy to dig itself an even deeper hole (take on more debt on its own) but this is fraught with onerous and obnoxious conditions that the Northern countries would impose, and with the obvious implausibility of piling yet more debt onto the comatose Italian economy. Italian leaders are outraged. Italian public opinion has tacked hard against the EU. There is open speculation about an Italian exit and/or default. There is a growing fear that Europe itself is at risk.

Of course “Europe” – the European Project, the idea of a union of some sort across the continent – has been at risk almost from the start, lurching from crisis to crisis, yet somehow staying afloat. One might discount the alarmism of the headlines — were it not for the fact that the “alarmists” lately include the leaders of important member states.

Even the bureaucrats are twitchy. The head of the European Central Bank, Christine Lagarde, recently walked back some unfortunate “un-mutual” comments. (She had allowed as how the price of Italian debt was not really her problem.) And so, out of remorse (one might say) the ECB promptly launched an extension of its own bond-buying program, targeting the “distressed debt” segment of the sovereign bond market, namely Italian, Spanish and Greek debt. The move was similar in spirit and structure to the Fed’s foray into corporate junk bonds. By committing its resources to buy Italian debt, the ECB signaled support for Italy with the aim of lowering its cost of issuing new bonds, and easing its access to the capital markets generally.

But it didn’t hold. Bond prices began to slide back to the mid-March level, and the yield climbed back above 2%.

In short, the Fed’s intervention to support the market worked. The ECB’s intervention did not. But why not? The situations are quite parallel. If the idea worked for Ford, why didn’t it work for Italy? 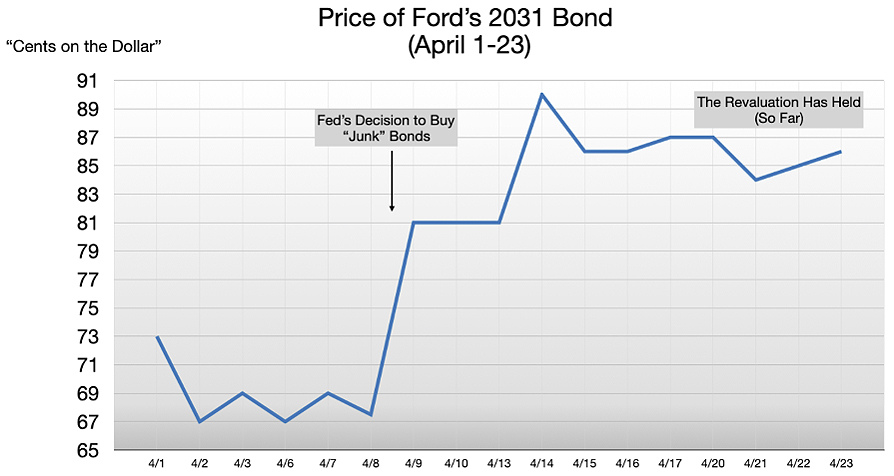 Here’s why. The Federal Reserve’s actions are imbued with a powerful principle, known as the “Full Faith and Credit” of the United States of America. This may sound like the sort of bland reassurance that accompanies a banker’s hand-shake. But it carries much more weight. It is the foundation of federalism in American finance today.

Now a short digression into the background of this somewhat magical phrase.

“Full Faith and Credit” – sonorous language that is at least three hundred years old. It emerges in the 1600s in the field of international contracts, treaties, and trade, basically as a way to vouch for the findings of a court, or the acts of a legal officer, in one country so as to be recognized as valid in another. The phrase was adopted as the opening of Article 4 of the U.S. Constitution (called “The Federal Article”), which requires each State to honor the “Acts, Records, and judicial Proceedings” of any other State. That is, it penetrates – and limits – the sovereignty of the individual States, to allow the legal framework of federalism to take root. Without it, the operation of the government (in words drawn from the debates at the Constitutional Convention in 1787) “would amount to nothing more than what now takes place among all Independent Nations.”

The “Credit” part of FFC did not originally mean bank credit, per se. But over time that meaning has shifted, or expanded, or been coopted. Today, in the language of American finance, FFC signifies the absolute guarantee underpinning the borrowing power of the Federal government. In the 19th century this guarantee was less than absolute. But since America’s rise to financial hegemony after World War II, no one seriously questions the U.S. government’s guarantee to honor its debts. In 2013, during a political standoff that threatened a potential breach of the federal debt ceiling and/or a default on U.S. debt obligations, the U.S. House of Representatives actually passed The Full Faith and Credit Act – intended to “permanently end the risk of the United States experiencing a sovereign default.” This particular bill died in the Senate for other reasons, but the magic words and the powerful principle were forcefully entitled, and a series of other legislative measures followed that collectively underscored the government’s promise to support the federal debt, no matter what.

FFC is the power the Fed wields when it needs to design a monetary stimulus. It can invest the Full Faith and Credit of the United States of America into the Quantitative Easing program, in all its chapters and codicils, even to purchasing Ford’s junk bonds. The market understands the power and durability of that commitment. FFC stands behind the strength of the Dollar as the world’s reserve currency. It stands behind the Fed’s role as de facto central banker to the world. It stands behind the trillions of dollars of Treasury bonds that have been sold to investors in Europe, the Middle East, China, Japan. It’s the reason that more U.S. currency circulates outside the United States than inside, finding its way into wallets of ordinary citizens in other nations all around the world, often displacing local currencies. It’s the reason companies and financial institutions even in China often choose to issue bonds denominated in dollars rather than renminbi.

Alas, the European Union has no “Full Faith and Credit” clause. But, you may say, don’t they have “Whatever-It-Takes”? – another magical phrase that saved the EU once before? Why is it not enough?

What the ECB’s then-President Mario Draghi actually said in 2012, to quench the Euro crisis, was:

“The ECB is ready to do whatever it takes to preserve the euro. And believe me, it will be enough.”

Most people focus on the first sentence. But the financial market is zeroing in now on the second sentence – especially the “believe me” part.

Believe me. Trust me. Me, Mario. Hmmm… The markets were willing to believe Draghi’s promise in 2012, but they are realizing that in this new crisis, a personal guarantee — especially when mingled with Mme. Lagarde’s equivocations – is not enough. For all the heartfelt declarations of solidarity we hear now from many European leaders, the market knows that Europe is still just one German or Dutch veto away from an abrupt end to any common relief program. The various policy proposals emanating from Brussels or Frankfurt all have to pass through the eye of this needle. Even the ECB’s cornerstone program of bond buying — its version of quantitative easing — is now under review by the German Supreme Court, which has already expressed itself “doubtful” as to its legality– “[it] may not be covered by the ECB’s mandate.” That is to say – a German Court could decide that the European Central Bank has acted “unconstitutionally” (to use a word Americans will understand in this context), and overturn the only European program that packs any punch right now. Whatever-it-takes is still a matter of merely ordinary faith and credit, the sort that all bankers extend or withhold, the sort that a court can invalidate, the sort that can be pulled back if “market conditions” are unfavorable, the sort that depends on how much you trust the man or woman who says it, rather than the framework that surrounds them.

Henry Kissinger famously asked “Who do I call if I want to call Europe?” He was referring to foreign policy, but the same question can be asked with respect to financial policy. The European Project does not yet have a coherent financial principle, or a clear executive power to administer it. The market knows this, which is why the ECB’s measures don’t have the same impact as the Fed’s.

Will things change? The answer is almost certainly Yes. The history of Finance can be charted as a nonlinear evolution, punctuated by breakdowns and crises that called forth “emergency responses” – dangerous, outrageous innovations, as they were seen and decried at first, enacted only as matters of dire necessity, which somehow worked, and so became permanent, moving the system forward. In the U.S., it was the Civil War that first blew up the gold standard and gave us paper currency and the federal income tax (both arguably violations of the Constitutional letter). The Depression and World War II legitimized deficit spending and the growth of public debt on a large scale. The 2008 crisis engendered quantitative easing – unthinkable before then. The Federal Reserve itself is the product of the 1907 financial crisis, which finally broke Americans’ resistance to the idea of a national Bank. Indeed, the very idea of a government bond – a paper promise backed only by the government’s word of honor, and sold to the trusting public — originated with the Bank of England, in 1697, as a desperate measure to finance England’s extravagant wars with France. Seen in this context, Europe’s eventual decision to accept eurobonds, coronabonds, or some similar financing mechanism held in common and backed by the whole union – would seem inevitable.