“We are not here to close the spreads.”

FRANKFURT AM MAIN, GERMANY – MARCH 12: Christine Lagarde (R), President of the European Central Bank (ECB), and Vice president Luis de Guindos (L) speak to the media following a meeting of the ECB governing board at ECB headquarters on March 12, 2020 in Frankfurt, Germany. The ECB is pursuing measures to counter the economic impact of the rapidly spreading coronavirus. The number of confirmed cases across Europe has reached 25,000. (Photo by Thomas Lohnes/Getty Images)

This is part of a series of posts dealing with the impact and implications of the COVID pandemic for the Financial world.

The idea of Federalism, for Americans, is comfortably hazy. It implies overlapping jurisdictions and competing responsibilities. There is the “State of New York” (or Florida, or Iowa), and then there is “The Federal Government.” The States pay for some things, and levy their own taxes. The Feds have the IRS. There are State courts and Federal courts. State police, and the FBI. States oversee the school systems. So does the Secretary of Education. The States regulate the banks and insurance companies. So do the Feds. Federalism has been called “an inherently unstable institutional arrangement.” And yet, it has endured here for more than two centuries (with only one civil war so far).

Normally, this hybrid system functions well enough. But in an emergency, like the COVID outbreak, there is often an initial stand-off between the States and the Feds, and uncertainty as to who has authority over what. Whose ventilators are whose? who owns that emergency medical stockpile? who can call for a quarantine? who decides about travel restrictions? which press conference should we watch? what about the military? People turn to citing the Constitution, to explain why something is too slow, or costs too much, or seems uncoordinated. We are reminded of Federalism’s awkwardness.

For all that, the tension usually plays out in a predictable way. The public ultimately expects the Federal Government to consolidate authority. Call out the National Guard. FEMA, the CDC. Print that helicopter money. Congress passes a bill, the President addresses the nation, and the crisis response becomes more coherent. Somewhat. Coordination improves. Somewhat. For the man or woman in the American street, Federalism comes to mean simply “We’re all in this together.”

It is not a perfect system, as even the Founders realized. Still, imagine what it would be like if there were no Federal Government. If the United States was just… The States. If Florida could embargo medical shipments to New York, or Ohio could close its borders to people from Pennsylvania. If a New York bank could refuse to cash checks drawn on banks in New Jersey. What a mess would ensue.

That mess… would be the European Union today.

It is widely acknowledged that the EU lacks a true Federal framework. (Indeed, Federalism has been called “the ‘F’ word in the EU context.”) Europe is stuck in what an American would call the era of States’ Rights. The 27 member countries are strong, and the central government is weak. The EU cannot tax, and cannot spend, at least not on a scale to support a meaningful stimulus package in times of economic distress. Each country sets its own policy, raises its own revenues, and spends as it wishes (with only very general guidelines from Brussels). There is an EU budget — but it is tiny, just 1% of the EU’s collective Gross Domestic Product (GDP). (Germany’s budget equates to about 44% of its GDP.) There is a common currency, and a European Central Bank (ECB) charged with managing that currency. The ECB can print money (like the Federal Reserve). But it cannot issue debt backed by the whole EU. There is no European equivalent of the U.S. Treasury, no “Eurobonds” to parallel the U.S. Treasury bond market. There is no “federal” instrument to finance a common EU program, no matter how urgent.

The dysfunctions that this anti-Federalism engenders are shocking to an American. Two examples:

Could we imagine (here in the U.S.) addressing Illinois’ credit difficulties, or Puerto Rico’s, by cutting them loose from the Dollar and forcing them to float their own currencies?

Who in America pays any attention to the fact that New York and California (for example) pay large subsidies through the Federal system – more than $1300 per NY citizen annually – to support economically weaker states like Mississippi? When did we hear politicians from Massachusetts (another subsidizer state) call for imposing conditions on aid for West Virginia?

The COVID crisis at first brought out more of the same. Germany banned the export of medical supplies, including ventilators – of which it has plenty – to stricken Italy. Austria unilaterally closed its borders to Italians. The President of the ECB, Christine Lagarde, allowed as how the ECB “is not here to close the spreads” – i.e., she didn’t see it as her job to address falling bond prices and Italy’s rising cost of financing COVID relief measures. (The particular “spread” in question is “Lo Spread” — the difference between the yields on the Italian 10-year bond and the German 10-year. It is the benchmark metric for the health of the Italian financial system.) Her remarks were inflammatory. “Lo Spread” immediately blew out, rising by more than 150 basis points in just a few days, sending the Milan stock market down by 17%. The Financial Times commented:

The darker view is that these trends may signify a regression to nationalism, and economic autarky, which could be the undoing of the EU itself.

But the mention of Coronabonds — the 2020 version of Eurobonds – raises another possibility. The financial impact of the COVID crisis is not just about the decline in share prices. It is also having a structural impact, with consequences that may last long after the virus has been subdued. We won’t simply return to normal. Some things will have changed for the better. When, some years from now, the tally of “silver linings” is being compiled, we may well find somewhere near the top of the list the recognition that there has been a sea-change in European finance: the creation (finally) of common EU funding mechanisms, and the emergence of a new market for fixed income instruments backed not by Italy or Germany, but by the entire European Union.

What are the bases for optimism? First, it makes sense, and everyone knows it (even those who oppose it). The EU must eventually have a way to fund larger programs, and in particular to channel resources more efficiently from the “California”s of Europe to its “Mississippi”s. Except for the Germans and the Dutch, everyone is pretty much on board with this. But that may be changing, too. In the Netherlands, the political blowback following last month’s veto of the Coronabonds proposal has been striking. In Germany, the so-called “Black Zero” policy – the government’s Siegfried Line for years against budget deficits — has evaporated overnight. The Financial Times reported on March 14:

This would have been inconceivable two months ago. The ECB followed suit. Ms. Lagarde recanted, with almost verbatim “whatever it takes” language that her predecessor Mario Draghi used to stanch the last crisis in 2012. A few days later, the ECB delivered a €750Bn euro bond-buying program, including as much Southern European debt as necessary, precisely to “close the Spread.” It’s not federalization yet, but it points the way. Markets responded and spreads returned to near-normal. 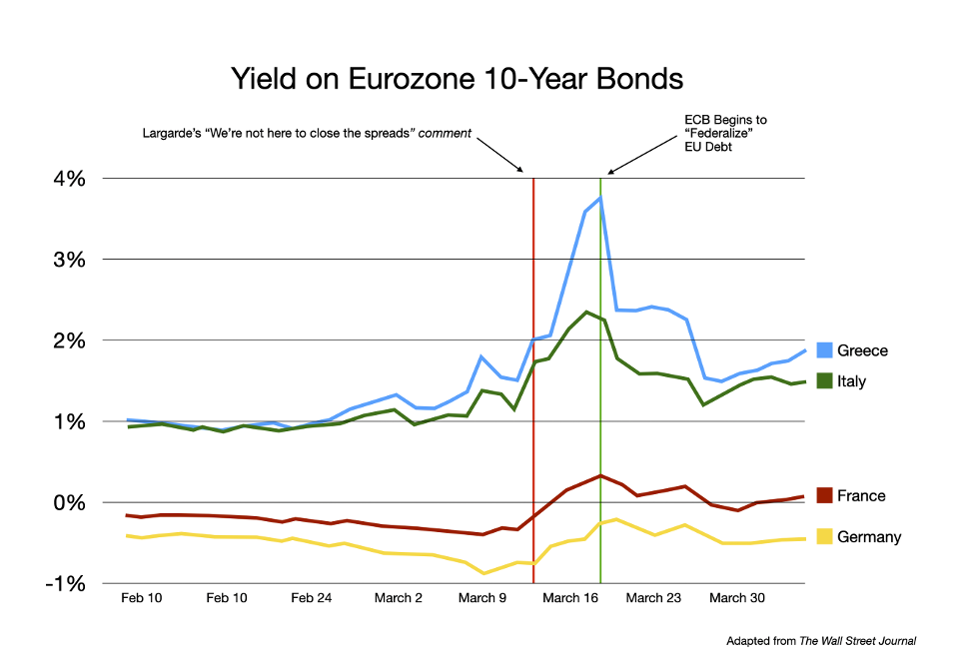 The COVID crisis will bring many changes to the financial system. The creation of a European “Treasury Bond-like” funding mechanism could be one of the most significant. One can envision, finally, the development of a European fixed income market that would rival the U.S. Treasury market. It would change investment strategies for asset managers all around the world, adding a new “haven” asset to anchor investment portfolios and further stabilize the global financial system. It would strengthen the Euro. It would help solidify the EU. And it could start to alleviate the regional inequalities that are driving so much of the political angst in Europe today.

Europe is stumbling towards a better constitution, one crisis at a time. A functional Federalism requires at least three pieces of financial infrastructure: (i) a common currency, (ii) a shared budget to address common policy issues – especially those that affect some members more than others and require transfers from richer to poorer regions – and (iii) a means of paying for it all. One solution is to issue debt backed by the entire polity. In 2012 Draghi tackled the question of the currency. In 2020, the Coronabonds proposal, in some form, may finally prompt the development of a “Federalist” foundation for a common economic policy. Eventually, this should help facilitate the emergence of a fiscal authority with EU-wide powers, and with that, a more perfect (European) Union.