Inflation is always and everywhere a monetary phenomenon… produced only by a more rapid increase in the quantity of money than in output. 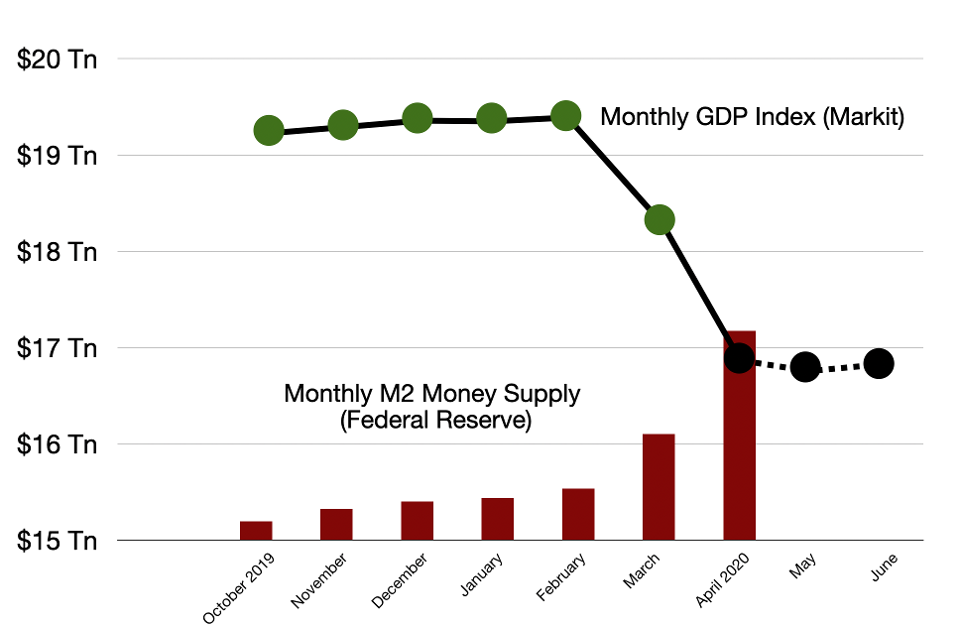 This piece is about Economics, as a discipline, and Inflation, as a public policy challenge, and the belated stripping away of conventional wisdom – one of the many effects of the Covid-19 pandemic.

The Covid-19 outbreak is what the economists call an exogenous shock — an unpredictable force crashing into the economy from outside the normal framework of the business cycles, supply and demand, trade patterns, monetary and fiscal policy. The impact has been more sudden and more severe than any previous macro-economic dislocation, perhaps excepting only Pearl Harbor. In the U.S., weekly jobless claims suddenly jumped by a factor of 30 over normal levels. Personal consumption fell 8% in March. We hardly need a litany of statistics to verify the trauma – we have all lived through it.

Governments have responded with massive economic stimulus programs. The U.S. pumped $2.4 trillion of relief spending into the system in a matter of weeks – with more to come (and we count only in trillions these days). The Federal Reserve announced a program of “unlimited” monetary stimulus. No more tapers, roll-offs, or twists. Just buy everything – Treasurys, corporate bonds, junk bond ETFs…. we’re in QE Infinity. We don’t even need a printing press anymore. New cash is conjured electronically. The Fed’s balance sheet blew out 12% in a single week. The money supply has expanded at a 27% annualized rate since February. 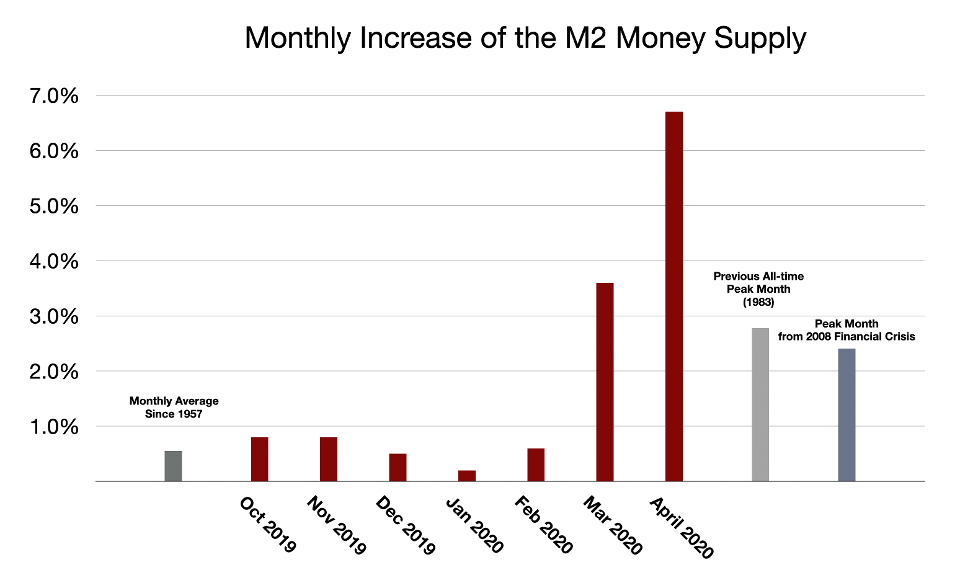 Monthly Increase in the M2 Money Supply CHART BY AUTHOR

This is all intended as a counter-shock, to break the psychology of panic (this seems to have been partially successful), and to cushion the impact of the demand shortfall caused by the pandemic lockdowns. All the spigots are wide open – everyone is in the Whatever-It-Takes mindset.

Whenever one hears the phrase “Whatever-It-Takes” it means that the technocrats are being shouldered out of the way by the Men (and Women) of Action. There is a very loose fabric of economic theory supporting this policy deluge – a sort of undergraduate textbook memory of the purported lessons of Keynesianism about the responsibility of the government to spend, spend its way out of this sort of crisis. But these stimulus programs are not emerging from models and mathematical calculations. They are — to use another cliché suddenly back in fashion – bazooka blasts, blunt and loud, fired off as much for the pyrotechnic display as for any substantive effect on consumer demand or credit markets. The economists have been sidelined by the bankers and the politicians. The expertise that counts now is medical, not macro-economic.

Economists then, being economists and academics (by training), have taken up the task of reasserting themselves, and eventually reclaiming their wonted seat at the policy tables, by doing what they do – forecasting for all of us the effects of these extraordinary, anomalous, possibly dangerous measures, taken without due deliberation, and largely without the benefit of their advice. They would warn us of the consequences of our innovations, using Theory to project dystopic scenarios that should frighten and scold us into inviting them back to the conversation.

Here we will consider the first nightmare. Those trillions, the so-called “helicopter money,” checks signed by the commander in chief, mailed or directly deposited to the accounts of tens of millions of middle class citizens, dripping with election-year politics, the surcharged unemployment benefits for those who have lost their jobs, the traditional liquidity channeled into the banking system, the adrenalin-like “repo” liquidity emailed to market makers, the dollar swap-lines for the world’s central banks, the unconstrained quantitative easing, the 27% increment to the money supply – doesn’t it all just have to translate to a classical explosion of inflation? Milton Friedman warned us – monetary expansion is the root cause, and now for the first time ever, the M2 is now larger than the GDP, with the gap widening at a rate of 15% or so per month, a fact of at least symbolic significance. The Covid-19 economy embodies this dislocation between the money supply and economic output. GDP is rapidly falling. The money supply is exploding. Inflation should be primed to detonate. A recent headline from the Financial Times is almost a scream: “Coronavirus Will Awaken Inflationary Forces Before The Year Is Out.”

There are three problems with this narrative: facts, theory, and the economic mindset.

The Facts don’t hold. Prices – which ought to have risen, with shortages and hoarding – fell in April. They fell sharply. In the U.S., “core prices [experienced] the largest monthly drop ever, in records dating to 1957.” In some cases, prices did not merely decline. They actually went negative — sellers paid buyers to take the product. This has happened with fundamental commodities including crude oil, electric power, and, most notably, credit itself (negative interest rates now hold for trillions of dollars of sovereign and corporate debt).

Second, the Theory doesn’t hold. Monetarism didn’t fail this Spring. It failed ten years ago, when the world’s central banks took up Quantitative Easing in earnest, to counter the effects of the 2008 Financial Crisis, and indeed to create inflation (so as to fight the worse dragon, deflation). They were counting on a (controlled) ignition of prices. Federal Reserve policymakers set an informal but widely publicized “inflation target” – a modest-enough 2%. In pursuit of this goal, the Fed created so much new money that its balance sheet grew by over 500% in a few short years. They kept at it well after the economy had recovered from the recession. If Friedman were right, we should have been living in a house afire this last decade, with inflation licking at the rafters, as the Fed printed money in quantities beyond anything he would ever have imagined. But inflation refused to ignite. The Fed achieved its inflation target just for one single month in the period from 2012 to 2019. Since QE, the prices of consumer services have increased a bit. The prices of consumer goods have been deflating for years. 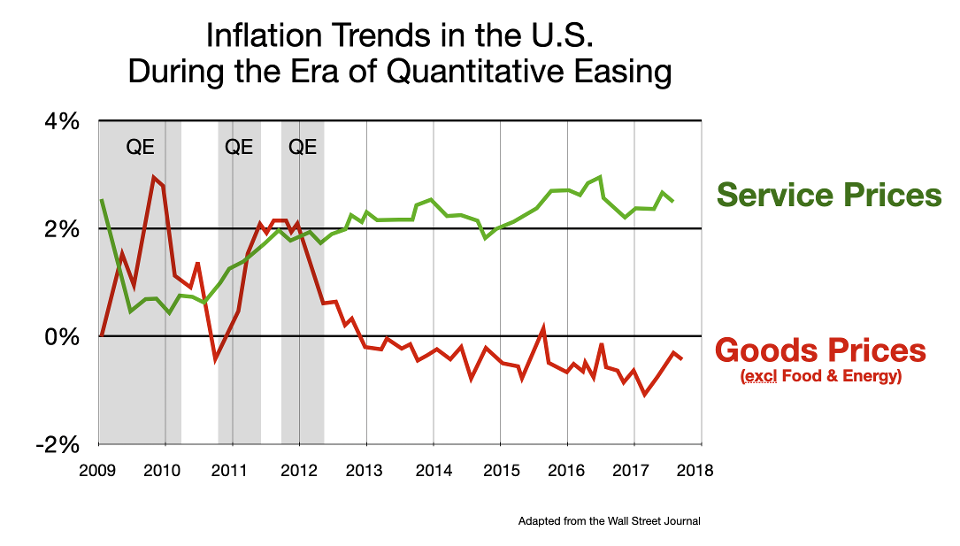 The leaders of the Federal Reserve – Greenspan, Bernanke, Yellen – have all been “puzzled” in turn. Warren Buffett is puzzled.

“No economics textbook I know that was written in the first couple of thousand years that discussed even the possibility that you could have this sort of situation continue and have all variables stay more or less the same.”

Chairman Powell is puzzled. He has tended towards the older, alternative theory, predating Friedman’s monetarism – which holds that inflation is caused principally by rising wages as the economy heats up and unemployment falls. This idea that there is a trade-off between inflation and employment, which has been a totem of economic policy, embraced on and off, is known as the Phillips Curve. As the unemployment rate came down to historic lows, Powell’s instinct was at first to believe the Phillips curve and the trade-off, which led him to raise interest rates — to cool the economy down, and head off the inflationary pressures that were purportedly lurking in all those Good Times.

Well, the Phillips curve has evidently “collapsed.” There is no longer any relationship between inflation and employment. 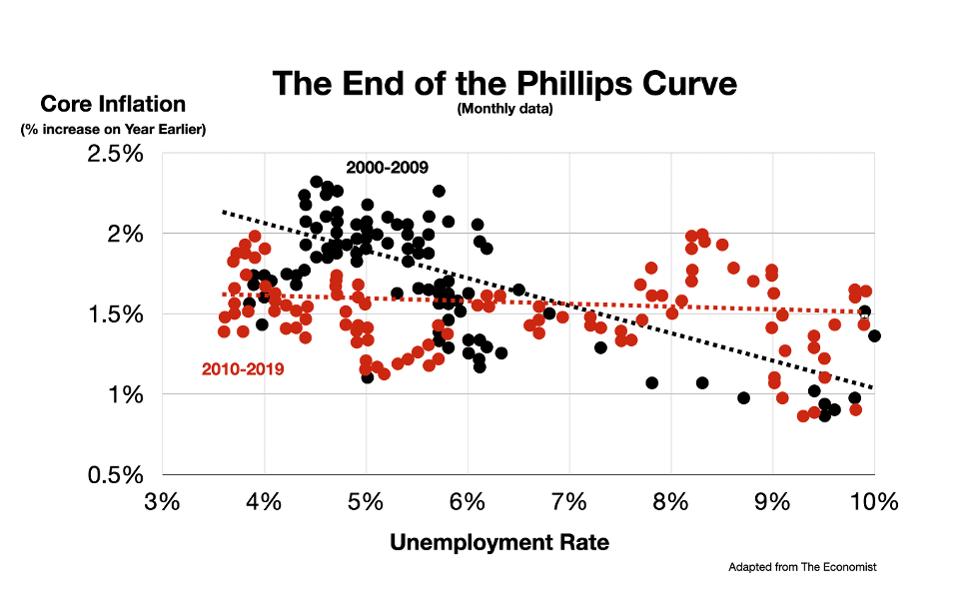 End of the Philips Curve CHART BY AUTHOR

In the face of this, Powell has retreated, philosophically, to the last bastion of economic explanation: the idea that inflation expectations are somehow stuck on “Low” – and this prevents prices from rising even when they should. Here, from a press conference in March 2019, is Powell’s complaint:

Inflation expectations play a very key role in our framework and other frameworks, and, you know, there is the possibility that some people discuss of expectations being anchored below 2 percent.

We’re really 10 years deep in this—almost 10 years—in this expansion, and inflation is still kind of, I’d say, not, you know, clearly meeting our target.

[We need] more creative thinking about ways we can, you know, uphold the credibility of our inflation target.

But the study of human expectations lies outside the traditional expertise of the Economists. As Bloomberg summarized, “Powell acknowledges [that] persistently low inflation is hard to explain using standard macroeconomic theory.”

All this has befuddled the commentariat. The FT article with the alarmist headline went on as follows:

“In the coming months, inflation will plummet…[with]the dramatic fall in oil prices”

“Alongside some recovery in oil prices, we will see overall inflation jump.”

Meanwhile, the Wall Street Journal ran to the other side of the boat, with its headline: Specter of Deflation Rises Again.

If the business press is in a muddle, it is not alone. The Economics mindset is under siege here, and will eventually give way to… new ideas. Why should the economy behave in 2020 the way it did in 1970, or 1919? The explanatory framework leaves out the critical component, the real causal factor driving prices and changes in relative values in the economic: Technology.

Technological progress is the source of a vast deflationary pressure –– but unlike the view of deflation held by traditional economists, tech-driven deflation is essentially all for the good, at least in terms of its effect on prices and the cost of living. And now Covid-19 is an accelerator, pushing tech trends that have already been underway for a while, but forcing them to jump forward in a nonlinear arc.

One of the great benefits of this pandemic is going to be clarity. Retail is dead. Long live online retail. Telemedicine is finally a reality. Entertainment, banking, travel, education – all will be transformed, and it’s no longer very hard to see how it will happen. Intellectual systems — like traditional economics — will lag the change cycle, but will not escape it.

The larger significance of “inflation” — and the question of whether we properly understand it – is that “price stability” is still part of the official mandate of the Federal Reserve, the European Central Bank, and the rest. So if the leaders of our Central Banks are bewildered and “puzzled,” it tells us that we need a thorough re-think of our ideas about prices and values in the economy. In part 2, we’ll pursue this thought.